Armenia VS Azerbaijan The Most Beautiful Wallpaper - Flag on The Face

Armenia VS Azerbaijan The Most Beautiful Wallpaper - Flag on The Face 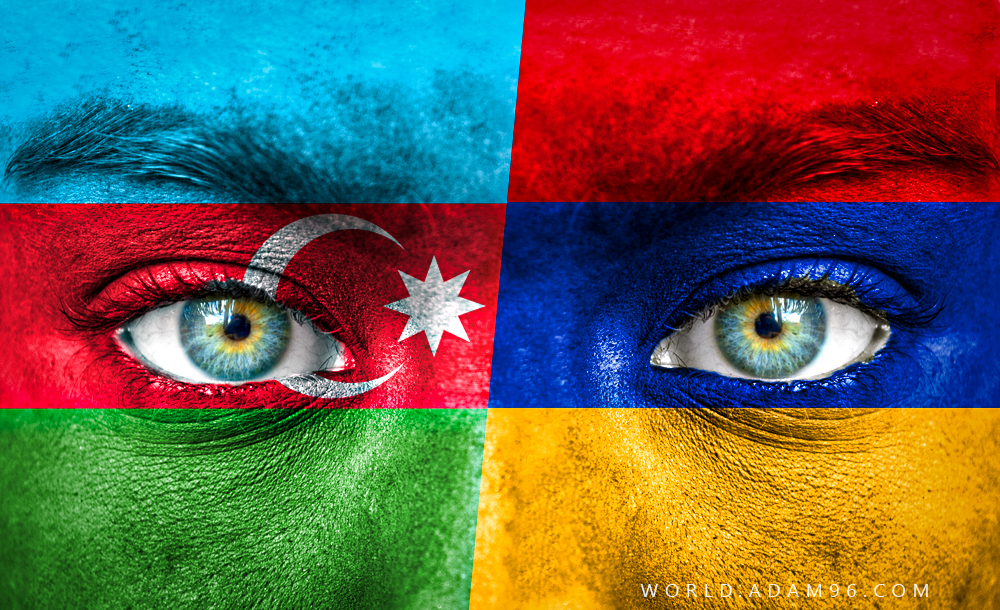 Fierce fighting raged for a second day following a flare-up of a decades-old conflict in the Caucasus region of south-eastern Europe.
Dozens of deaths were reported in battles between forces fighting for Armenia and Azerbaijan on Monday.
At the heart of the conflict is a dispute over control of the mountainous region of Nagorno-Karabakh.
It is recognised as part of Azerbaijan, but has been controlled by ethnic Armenians since a war ended in 1994.
Tens of thousands of people died during that war and a million others were forced to leave their homes.
Armenia prides itself on being the first nation to formally adopt Christianity (early 4th century). Despite periods of autonomy, over the centuries Armenia came under the sway of various empires including the Roman, Byzantine, Arab, Persian, and Ottoman. During World War I in the western portion of Armenia, the Ottoman Empire instituted a policy of forced resettlement coupled with other harsh practices that resulted in at least 1 million Armenian deaths. The eastern area of Armenia was ceded by the Ottomans to Russia in 1828; this portion declared its independence in 1918, but was conquered by the Soviet Red Army in 1920.
Armenia remains involved in the protracted Nagorno-Karabakh conflict with Azerbaijan. Nagorno-Karabakh was a primarily ethnic Armenian region that Moscow recognized in 1923 as an autonomous oblast within Soviet Azerbaijan. In the late Soviet period, a separatist movement developed which sought to end Azerbaijani control over the region. Fighting over Nagorno-Karabakh began in 1988 and escalated after Armenia and Azerbaijan attained independence from the Soviet Union in 1991. By the time a ceasefire took effect in May 1994, separatists, with Armenian support, controlled Nagorno-Karabakh and seven surrounding Azerbaijani territories. The 1994 ceasefire continues to hold, although violence continues along the line of contact separating the opposing forces, as well as the Armenia-Azerbaijan international border. The final status of Nagorno-Karabakh remains the subject of international mediation by the Organization for Security and Cooperation in Europe (OSCE) Minsk Group, which works to help the sides settle the conflict peacefully. The OSCE Minsk Group is co-chaired by the US, France, and Russia.
Turkey closed the common border with Armenia in 1993 in support of Azerbaijan in its conflict with Armenia over control of Nagorno-Karabakh and surrounding areas, further hampering Armenian economic growth. In 2009, Armenia and Turkey signed Protocols normalizing relations between the two countries, but neither country ratified the Protocols, and Armenia officially withdrew from the Protocols in March 2018. In 2015, Armenia joined the Eurasian Economic Union alongside Russia, Belarus, Kazakhstan, and Kyrgyzstan. In November 2017, Armenia signed a Comprehensive and Enhanced Partnership Agreement (CEPA) with the EU. In spring 2018, Serzh SARGSIAN of the Republican Party of Armenia (RPA) stepped down and Civil Contract party leader Nikol PASHINYAN became prime minister.
Post a Comment
Share
Labels#Armenia, #Asia, #Azerbaijan
Newer
Older